Through this series we aim to share with you, likely managers at similar agencies, the valuable resource scheduling lessons we at MojoTech have learned along the way. I thought it would be helpful to start with the story (and picture) of why we built Allocate, because you likely can relate to where we were coming from last year.

For about two years MojoTech used a spreadsheet to track our resource allocations before we decided to build Allocate. At the time the spreadsheet met our needs, but became cumbersome and time-consuming to use as we outgrew it. Here’s a screenshot of what it looked like at the time of abandonment, showing the upcoming four weeks from the last time we used it back in March 2013: 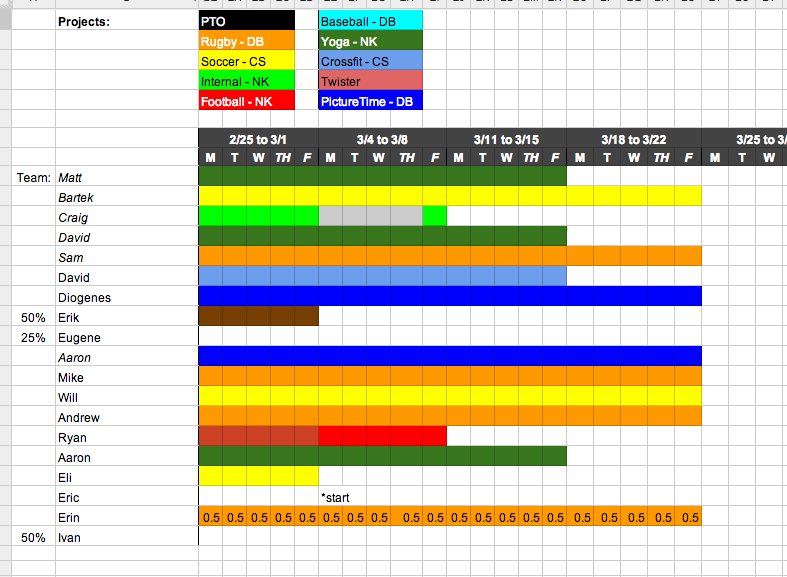 Yeah, it’s kind of a mess. And compared to Allocate’s UI, I’m finding the colored grid blocks pretty funny. I’ve included it here not just for a chuckle, but in case some of you can relate. I know there are agencies out there still tracking their allocations on a shared spreadsheet, or maybe even in some physical manifestation within your office (post-its on your wall?).

Week after week, we were manually adding columns for days and weeks, rows for people, and color-coding projects. Whoever was running our weekly scheduling meeting would have to open up that spreadsheet five minutes ahead of time just to get the next week’s calendar set up and ready for updating. And then we’d add the little colored blocks to denote a resource on a project for an upcoming week. It was a distracting chore and there was too much room for simple human error--accidentally giving an allocation a wrong project color or dating a week incorrectly. We found ourselves leaving out important information when we ran out of room or needed to make a note.

We knew we had out-grown the spreadsheet, but we couldn’t find a tool that was faster and easier to start using than what we had now. But…we’re MojoTech--we build apps! So why don’t we just build a tool ourselves that solves this resource allocation problem? After some market research, we decided to go ahead and build Allocate, hoping it would help other agencies like us, too. All those spreadsheet-related headaches we were experiencing motivated us to work fast, and the result is the beta release of Allocate that you see today at www.allocatehq.com.

Next week, we’ll discuss how releasing Allocate was a truly rewarding lesson in to sticking to an MVP.