It’s been five months since I started as Product Manager for Allocate (MojoTech’s super-simple resource planning app). What have I learned? One trend that stood out was that users were signing up, but not staying on to actively use the app - even though it was free. This told us that people were definitely looking for an easy scheduling tool, but that Allocate wasn’t everything they’d hoped it would be. We needed to fix that!

The first step was to speak to our beta users. They gave us great feedback on features large and small that they were looking for, like the ability to “zoom out” to a month view. Next we tackled speed and performance issues and some key UX and UI pain points that we heard consistently. Importantly we also added event tracking across the app to see how people really used Allocate. This helped us get to the point where we were confident that Allocate was a tool that would help businesses tackle resource scheduling and be worth paying for!

So let’s take a look at how things have changed in terms of active scheduling boards, user actions, time on the app and bounce rate - all measures of user engagement.

Some facts and and figures: 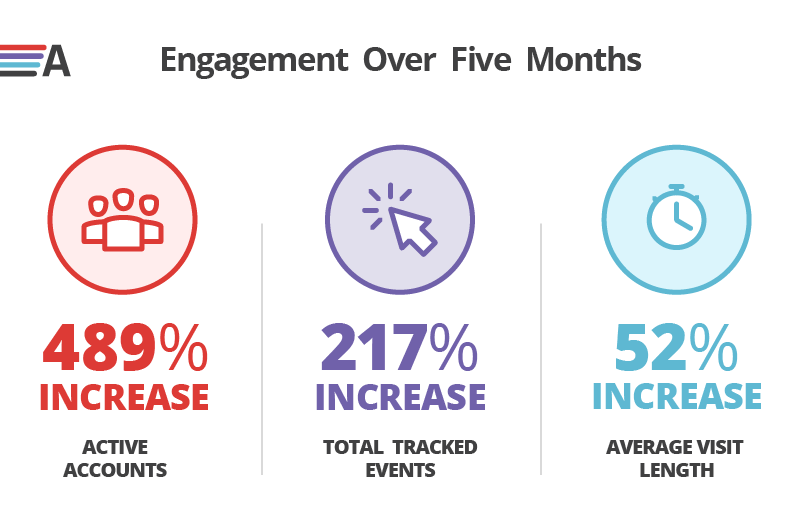 • We use Google Analytics to track events. We do this not only to see how users are interacting with the app, but also to track the amount of logged-in activity that is occurring on our account pages. Let’s define an “active account” as an account page that sees at least 4 visits a month where least one event occurs - like scrolling or changing an Allocation. Using that benchmark, we have seen our number of active account pages increase 70% since October, with an especially nice jump from December to January. If we go back five months, active accounts have quadrupled.

• Google Analytics also gives us an average visit duration. From August through October this was consistent at around 5 minutes. In November, after we released some nice usability fixes, it doubled to 10:27; 11:36 in December; and 8:42 in January for a healthy 52% increase overall. Total tracked events on the site follows basically the same curve.

• GoSquared shows us our bounce rate has decreased at a steady rate since the fall, ending 16% lower in January. Traffic has increased a bit during this time too, and our conversion rate has been consistent. The decreased bounce rate is great, and has been boosted by previously onboarded users returning to their dormant accounts.

Our users are staying on the site longer and performing more actions while they’re around. The November-December engagement increases line up with some nice performance enhancements and UI adjustments that definitely made the app faster and easier to use.

Allocate is on its way to being a really powerful tool, and there are plenty more features that have been requested that we know will help anyone schedule and plan more efficiently. We are also adding a little polish to our marketing site to attract even more users - and more invaluable feedback to help us build better product.

As always, feel free to share your thoughts on this subject or any questions/suggestions for Allocate here in the comments.